While living in Uganda we had the opportunity to travel around the country and experience all the nature and wildlife the national parks have to offer. What we discovered pretty quickly was that travelling in Africa cannot be compared to other continents we’ve visited. Tourism in Africa is much different to what you would typically experience in places like South East Asia, South America or Europe. It’s not set up in a way that you can just wing it, plan as you go and hope for the best knowing that it will all pan out. After encountering numerous challenges throughout our trips in Uganda, we decided to go out with a bang and book an all-inclusive luxury safari, where all risks have been mitigated and you’re pretty much guaranteed the experience of a life time. It was by far the most extravagant and expensive experience we’ve ever indulged in but we certainly have no regrets!

The truth of how it came about goes back to a day when we were set to do an early morning game drive in Murchison Falls National Park. We knew the ferry was leaving at 7am from the river crossing which was an hour from the park entrance so we arrived at 5:30am only to be informed by the ranger that the park opens at 7am – go figure! How do you board the 7am ferry when the park opens at 7am? So we had no choice but to sleep in the van for an hour and half and then set off to meet the 8:30am ferry. Low and behold when we reached the river the ferry had decided to leave five minutes early! A first in Ugandan history I’m certain. In that moment of frustration I grabbed my phone and Googled ‘luxury safari glamping under the stars’, clicked ‘images’ and scrolled until I found an image of what looked like a bed covered by a mosquito net on top of a treehouse. I opened the link and said to Logan ‘we’re going here’. Within a couple of weeks we were booked at the Sable Alley Camp in the Okavango Delta, Botswana. 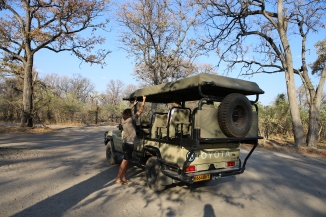 We flew into Maun airport where we boarded a small ten passenger plane that would drop passengers at the various camps scattered across the Delta. After flying across the vast landscape we spotted a strip of tarmac and the classic sandy coloured Land Cruiser you expect to see on any imagined safari. After our guide handed us some icy cold beers we headed to camp.

G&T’s by the pool in between game drives

The mornings and evenings were filled with game drives successful beyond our imaginations. We saw breeding herds of up to twenty elephants with their young. We saw lionesses rolling around playfully with their cubs in the long grass at sunset.

We saw a male lion stalking some wild dogs one day and sleeping peacefully the next. We saw two families of endangered wild dogs feasting on a recent kill of impala. In front of our camp was a waterhole, home to some 30+ hippopotamuses of all sizes and ages. Each morning we would watch as they returned from their nightly escapades to submerge themselves in the water, protected from the harsh sun.

One night on our way back from a drive we saw a leopard creeping through the shrubs around the outskirts of the camp. We saw zebras, giraffes, water buffalo, hyenas, springbok, waterbuck, crocodiles, monkeys and loads of birds. But the highlight of the three days was by far the day we saw a cheetah with her two cubs. We watched as she left the cubs under a tree and gracefully stalked her way through some long grass toward an unsuspecting herd of impala. Once she got within 50 metres of the herd she suddenly took off leaving a cloud of dust in her trail and took down one of the smaller of the herd. We drove around to get a closer look and watched as she dragged the carcass into some long grass, hidden from other predators. She walked over to a mound of dirt and began calling for her cubs. The well-trained cubs stayed put under the tree where she had left them, so she eventually gave up and walked over to gather them and lead them back to the kill. Watching this fascinating display of nature was such an incredible experience, we were so fortunate. It was as if we were on the live set of a National Geographic documentary. 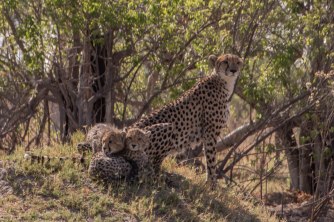 On our final night we drove across the vast and ever-changing landscape to the Sky Beds. Three individual tree-house-like structures with a bed on the top floor and nothing between you and the stars but a mosquito net. After dinner and another fiery African sunset we fell asleep with a stunning view of the Milkyway and the sound of lions roaring in the distance. Our African Safari experience could not have been more perfect, not a single glitch or hiccup, all our expectations fulfilled. 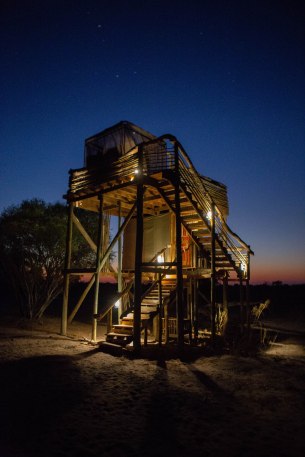 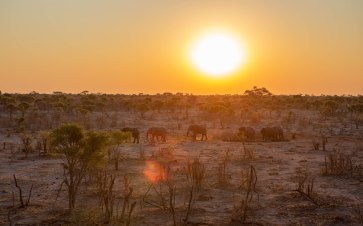 Hippo covered in scratches from being attacked

We watched the elephants from this sunken shipping container 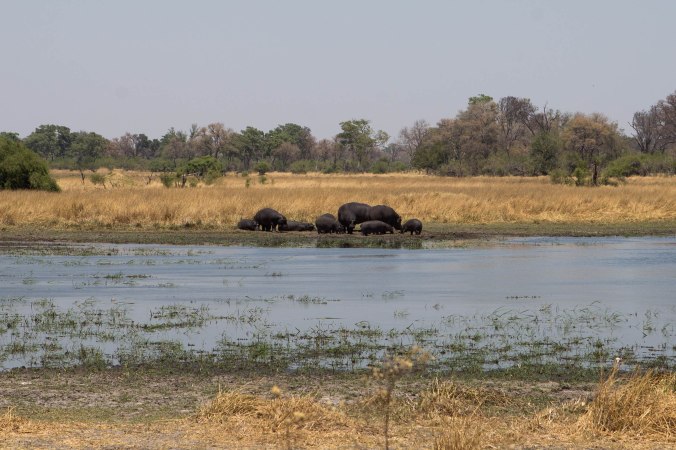 Hippos in the waterhole in front of camp 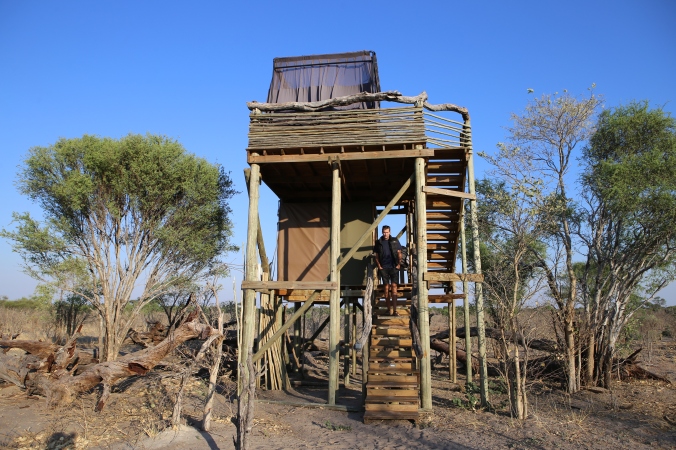 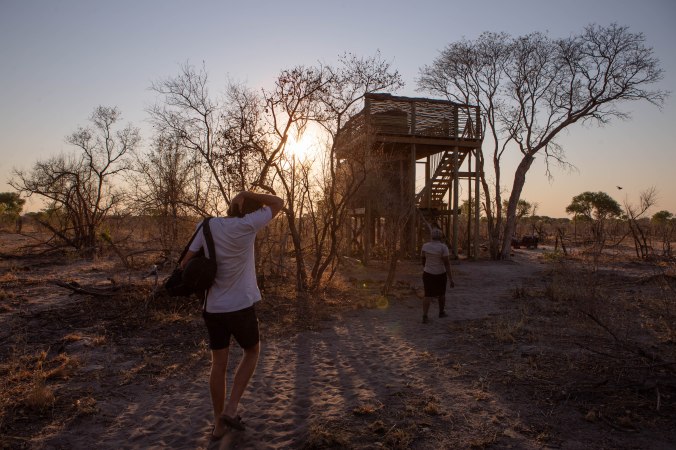 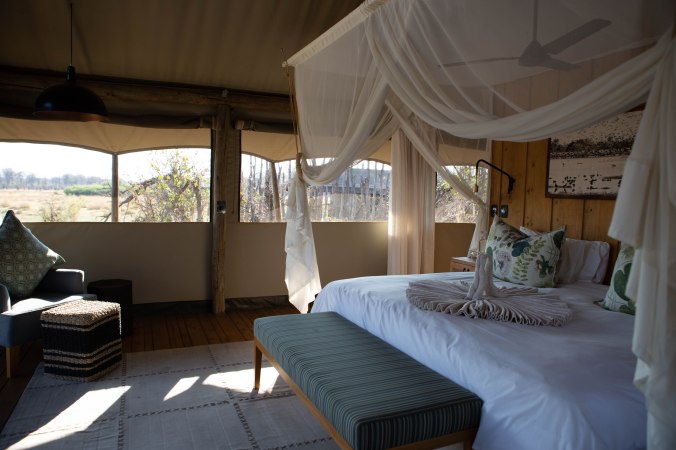 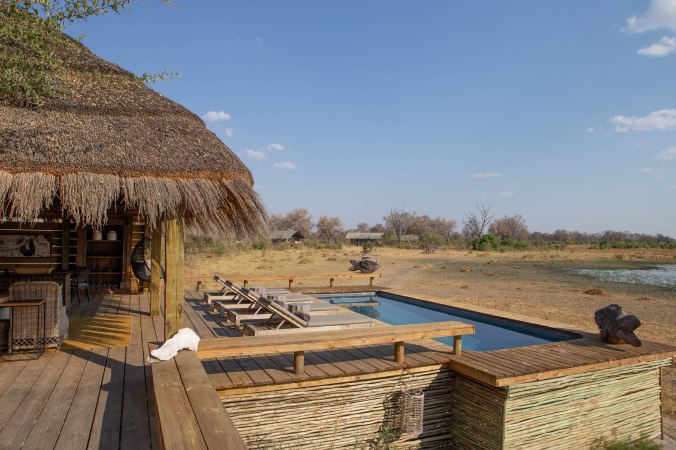